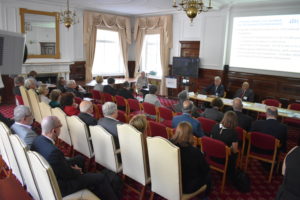 After Brussels, Paris and Rome, members of the European Expert Institute and Experts (EEEI) met in London at the annual General Assembly (GA) with the support of the Expert Witness Institute (EWI) on the 18th of May 2017, which illustrated the European character of its work.

This year was even more remarkable as after ten years efforts to improve the quality of judicial expertise and thus Justice in Europe the EEEI renewed its statutes and especially its management team : the President Jean-Raymond LEMAIRE left to the great regret of its members.

During the ordinary GA, the annual review of the Institute and the program for 2017 were explained.

The “Good Practice Guide” of judicial civil expertise, produced by the “EGLE” project, which was co-financed by the European Commission, is available online and was translated into 8 languages (FR-EN-ES-BG-IT-PT-DE-RO ). It has already been read 50,000 times and downloaded 15.000 times. With the assistance of the European Parliament, Éditions LARCIER launched the publication of a bilingual version (FR / EN) in October 2016.

The EEEI continues to expand its work in Europe within the European scene by adopting two large-scale projects, “Find an Expert”, which will be co-financed by the European Commission, and “EurexCrim”.

“Find an Expert” will start in September 2017. It aims to provide a first European directory of judicial experts which will be published on the European “e-Justice portal”. This will have a significant impact on all litigants and judicial actors who will be able to find a judicial expert of their choice working in the European Union by 2019.

“EurexCrim” aims to promote judicial cooperation by providing an inventory of the expertise proceedings both in criminal investigations and judicial processes in Europe. They are still looking for partners and financial support.

The “Training of Lawyers and Judges” project that was launched in cooperation with the “School of Professional Training of the Bar of the Court of Appeal of Paris” (EFB), finally aims to train lawyers in judicial expertise. Further developments will be envisaged in other countries and with judge schools.

The extraordinary GA certainly was the highlight of the day : amendments of the statutes which adapt them to the development of the Institute and its governance ; it culminated in the change of presidency.

The departure of Jean-Raymond LEMAIRE as the President of the EEEI was decided and acknowledged. The members reaffirmed their friendship and thanked him for the exceptional adventure which made the Institute the European the central reference in judicial expertise. The EEEI counts 172 individual members (experts, magistrates, lawyers, academics), 55 institutional members (Courts of Appeal, Bars and Law Offices) that represent 11 countries (BE-CZ-DE-ES-FR-IT-LU-NL-PT-RO-UK). Encouraged by the success of the projects on civil expertise (EUREXPERTISE, EGLE, publication of the “Guide“), the EEEI has proven the importance of its activity which improves the judicial assessment system in the Union. As an observer member of the European Commission for the Efficiency of Justice (CEPEJ), connections were also built up with Morocco, Canada, and European bodies. More broadly, 73 institutions from 16 countries (in addition : BG-EL-PL-AT-SK) participate in its work.

The Assembly unanimously decided to award him the title of Honorary President.

The new Co-Presidency was elected unanimously : Béatrice DESHAYES is a lawyer at the Cologne Bar and at the Paris Bar. Etienne CLAES is a Belgian accountant and tax adviser who serves as vice-president of the Belgian National Court of Justice (CNEJ) and promotes the national register of experts in Belgium. With a broad experience of the Institute’s actions, they have all the necessary assets to continue the work undertaken and to create new momentum, remaining faithful to the EEEI’s values, as Jean-Raymond LEMAIRE reminded during his speech Closure : “[…] Overcome the differences, keep an open mind and cultivate the team spirit, which is the strength of the Institute … It is a small association by its means and structures but one which accomplishes great things by its ability to influence and by the energy it derives from its members, experts as recognized legal professionals, experience and volunteers “.

The morning ended with a lecture by EWI members : Sir Anthony HOOPER, who shared his experience as an “expert witness” and Dr John SORABJI on the organization of justice in the United Kingdom and the place of experts. Finally, Ms Martine KLOEPFER-PELESE, Scientific Director of EFB training, presented the importance of building a strong relationship with the EEEI in order to train lawyers in the expertise and to sustain a constructive dialogue between experts and lawyers, the Judicial body whose roles are decisive in the judicial process.

The participants were warmly welcomed in the afternoon at the Supreme Court of London by Lord KERR, one of its Judges, and could get a glimpse of the peculiarities of this jurisdiction with very extensive powers.