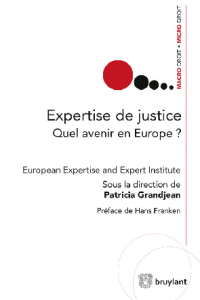 Aspiring to an area of freedom, safety, and justice, European citizens have empowered themselves with many joint tools in order to enjoy the same rights across their host countries.

And yet, the diversity of their justice systems is an obstacle to fair and efficient submission to a judge, namely in cross-border litigation. Sometimes this makes the reality of a common law as built by European authorities and jurisdictions an idle concept.

Noting the increasing importance of technical expertise in court decisions, the European Expertise and Experts Institute (EEEI), recently admitted as an Observer of the CEPEJ (European Commission for the Efficiency of Justice) has for several years been carrying out a reflexion on the ways to harmonise the rules of judicial expertise in order to obtain mutual recognition by the courts of the European States regardless of their internal law.

Within the framework of a project supported by the European Commission on the initiative of the EEEI, legal professionals, judges, prosecutors, lawyers, and academics from 18 European Union Member States met in March 2012 in Brussels for a symposium where they strongly expressed their involvement in favour of a harmonisation that would truly enable the passage of a legal Europe to a judicial Europe.