The EEEI held its Annual General Assembly, May 27, 2016. After the welcome and the speech of Mr. the First President of the “Cour de Cassation” of Paris, in the prestigious surrounding of “la Grand’chambre de la Cour”.

Ninety members and European guests attended. Robert Bray, Head of Unit at the Secretariat of the European Parliament’s Legal Affairs Committee, then presented assignments of the Legal Committee in the harmonization of European law, which includes judicial expertise.

The detailed program of the afternoon :

The agenda will be as follows :

Following the General Assembly, several participants attended a concert at the “Sainte Chapelle”, very slim jewel case with its high stained glass windows with his sculptures in wood and stone. In this jewel the stained glass windows with its sculptures in wood and stone, this gem of High Gothic offers a unique surroundings to enjoy a chamber music concert with in the program Vivaldi, Bach, and Vitali. A wonderful musical performance in an extraordinary atmosphere. 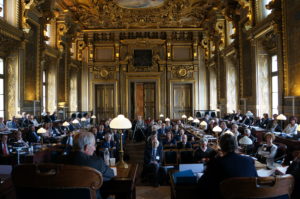