The Plenary Conference of 29th May at the Court of Cassation in Rome was prismatically diverse – but designed to focus on a single consensual outcome, a summary of the output of the working groups whose deliberations has spanned the gestation period of 9 months. The conference celebrated representation of no fewer than 21 member states – as well a representative of the European Parliament, judges, experts and others with an interest in forging principles of ‘best practice for expert evidence. Notwithstanding a diversity of legal systems and languages, the assembled delegates aimed to harmonise and improve the principles governing expert witnesses within the domain of civil law. Whether these principles would be very different for criminal litigation was a question that was left hanging tantalisingly in the air.

In seeking common principles for expert evidence, the opportunity arises to improve the quality of expert evidence at all levels, and this aim was broadly shared. Indeed within a very short time following the conference the EEEI has been asked whether the President of the Supreme Court of the Slovak Republic could use the themes and conclusions of the conference to help draft legislation in relation to experts in Slovakia. This is, surely, harmonisation in the making !

Delegates were provided with a spectacularly grand stage for the conference at the Court of Cassation. Chatting thoughtlessly, I suggested that the stone cladding in the vestibule was of sandstone – only to be corrected by an expert architect who gently corrected me : it was, of course, marble. Although there were experts from many fields at the conference, there were also magistrates and many prominent judges from around Europe. And there were surfaces of interest other than the stone cladding : in the beautiful conference room itself, a plaque bore the names of judges murdered over the years by the Italian mafia. Just beneath the surface there were serious issues to consider.

Working group 1 handled the instruction of the expert and the expert’s role. The distinction between the expert’s appointment by the Judge or by the Parties was not considered a major stumbling block. Rather, the group sought common principles concerning the rationale for selection and management of experts, as difficult, one might imagine, as herding cats. In common with Working group 3, it was suggested that experts should be evaluated within the member State as a precursor to the establishment of a European register of experts, although it was not clear exactly how this would be administered. There was some concern that this could lead to ‘cheaper experts undercutting the locals, and at a practical level I idly wondered how much might be lost in translation if the border between the disputed parties happened to separate different languages. Focussing on principles of ‘good practice’, the group asserted some generally agreed principles that the expert should exhibit such as technical competence (by what indices ?), professional experience, impartiality, independence, maintenance of appropriate indemnity insurance – and adherence to a ‘Charter of the principles of European expertise (yet to be penned). The need for clear formulation and reformulation of the expert’s instructions, the setting of deadlines, prior agreement as to costs, and a principle of fair compensation for the expert were also uncontroversial.

Working Group 2, for which I served as deputy rapporteur, had adopted an internet questionnaire methodology in order to canvass as widely as possible for opinions on the expert’s work and report-writing. The group had considered the mechanisms for appointing (and dismissing) experts, procedural guidelines for the expert’s work, the management of time scales and disclosure. A framework for report-writing was articulated. Since the group’s rapporteur competently held the stage for most of the session, as deputy I was able to survey the audience who gave a good semblance of wakefulness throughout.

Working Group 3 provided an admirably clear exposition, and the rapporteur subsequently received compliments on her performance with good grace. The subject matter was the potentially thorny problem of evaluating and re-evaluating experts (every 5 years). The term ‘accreditation was carefully reserved for expert witness service providers, whereas ‘certification was applied to individual experts. By certifying experts using explicit quality standards, the group considered that the standards of quality could be assessed by judges plus subject-specific experts. I was particularly interested in the clear declaration of the expert’s independence, and the need to guard against ‘improper pressures and interests’. What was less clear was how fields of expertise might be harmonised across the EU. The presentation was lightened by the use of graphics, although I was not sure whether an image of a snowy escarpment with a sign reading ‘EXPERTS ONLY was intended to be inviting or forbidding. The expert would be well advised, I suppose, to tread with care at all times. 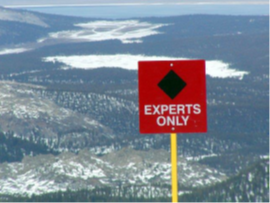 Working Group 4 of course had the forbidding task of establishing expert’s ethics (deontology), and also the problem of some overlap with presentations earlier in the day. Personally, I struggled with some of the simultaneous translation, but one can but sympathise with interpreters losing their way between loyauté (in describing a desired property of the expert) and ‘probity’ (probité), which may have been a better translation than ‘loyalty in the context. ‘Loyalty’ in some quarters is more frequently associated with Queen, country and spouse, and by the time one or more the above have been briefly contemplated, the remainder of the paragraph has been lost. (One can but wonder how many paragraphs were lost to a Russian delegate at the UN many years ago, when idiom ‘the body is strong but the spirit (la volonté) is weak was translated into Russian as ‘the meat is good but the vodka is off’ !). And on a more serious note, I must express my thanks for the efforts made to embrace the Anglophones ; our colleagues from Bulgaria, Portugal, Estonia enjoyed no such accommodation. More significant than linguistic differences, one may hope for a common commitment to core concepts such as ‘probity (which will, surely, be instilled in a European Code of Conduct for Experts). And so, notwithstanding the occasional linguistic maze, we arrived at some shared aims, enjoyed excellent conference organisation, impromptu operatic singing after dinner, great weather, and with a bit of luck, we moved one step closer to harmonising and improving expert evidence across Europe.