Good practice in civil judicial expertise in the European Union, towards a European expertise 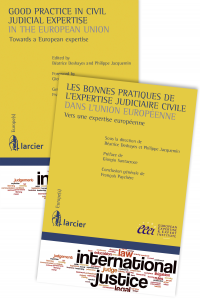 In order to continue the work undertaken for the EGLE project (European Guide for Legal Expertise), co-financed by the European Commission, a guide to good pratices in civil judiciail expertise in the European Union has been published (electronic format) in November 2015. Available in 6 languages, it has been downloaded more than 15 000 times, and has just been recently published by a Belgian editor : Bruylant.

Good practice in civil judicial expertise in the European Union, towards a European expertise published in partnership with the publisher LARCIER edited by Béatrice Deshayes and Philippe Jacquemin.

With a foreword by Giorgio Santacroce, Honorary First President of the Italian Court of Cassation and the conclusion by François Paychère, Chairman of the GT-QUAL (Council of Europe), the text is a collection of contributions of the well-known personalities in the judiciary.

October 12, 2016, the book was presented to the European Parliament in Brussels, the President of the Legal Affairs Committee (JURI) Pavel Svoboda welcomed the involvement of EEEI to make accessible the similarities and differences between the legal systems and judicial indicating that the book was an important step towards such knowledge. The MEP Nathalie Griesbeck was present at the presentation.