“When people write, they actually describe themselves.

Our writing tells us something about ourselves from an internal point of view, but also about how we position ourselves in front of the world.

None of the fields in which the human personality can express itself is excluded from the observation of graphology, which, although being a unitary test, does not act in a unitary way, but diversifies the performance in harmony with the application sectors. ”

Graphology has as an ultimate purpose the observation of the characteristics of the person through his writing which must be characterized by spontaneity. Likewise, graphological science derives important and meaningful information even from apparently banal “scribbles” and “drawings”.

Father Girolamo Moretti was the founder of the Italian School of Graphology, whose methodology is taught at the University of Urbino; he established principles and rules acquired in decades of experiments and clinical practice.

The fields of application of graphological science are many and varied, which is why very often, the graphologist finds himself working together with specialists from other sectors.

Writing deriving from an involuntary and automatic behavior, above all, reveals what is not expressed in words, the motivations and, in a limited way, also the “lived”.

The person who writes, escaping from the control of his mind, offers a clear, global, immediate, rapid and deep vision of his own personality.

Fields of application of Graphology

Graphology can express itself on the intelligence of the child examined; can offer advice on pupils in difficulty and on particular problems such as “dysgraphia or dyslexia”.

It can help the student by offering advice for the choice of a high school or university faculty.

Studying the writing of children and adolescents can help parents and teachers to understand their behaviors, for problem solving and conditioning during the evolutionary path.

The graphologist draws from the writing all the elements aimed at establishing the strengths and weaknesses of the subject to be selected.

From the handwriting, he can extrapolate the potential of employees and collaborators by evaluating sometimes undeclared attitudes.

It can predict their behavior towards superiors or any other factors that affect interpersonal relationships.

It can also highlight a personality reluctant to make decisions and a tendency to postpone decision-making.

Graphology can reveal the determining elements for a couple compatibility diagnosis or the possible difficulties that may arise in future coexistence.

In the judiciary, the figure of the graphologist is foreseen by the code; he assists the Judge or is configured as technical defender of the party.

The graphological method, unlike the calligraphic method which makes a formal comparison between homographic letters, analyzes the movement, the gesture, the dynamism, the graphic personality of the one who writes without however carrying out a personality analysis.

The most frequent cases of verification, in the judicial field, concern signatures and subscriptions on promissory notes, checks and documents, drafting of wills, anonymous letters, but, sometimes, are submitted to the graphologist also wall graffiti made with spray cans.

Graphology is characterized by its scientific character, which comes, as for the other sciences, from demonstrations of the various statements and rigor in the application of the method.

Last point, and not the least important, is the possibility for the graphologist to identify in whatever writing it is, any signs of imitation or dissimulation, since the falsification inevitably leaves traces of the effort sustained by the subject.

Even the “false documents” has returned by right within the competence of the judicial graphologist, provided that the latter has the appropriate tools to check for any cancellations and / or scrapings with overwriting, as well as the temporal sequence of two overlapping graphic lines.

Personally I had the great honor of dealing with two internationally recognized Italian painters.

I was asked to examine a painting by this artist, at the bottom of which was a dedication written in the hand of the painter with his signature.

In 2008, a wooden panel with the self-portrait of Leonardo da Vinci was found in Campania (Italy).

On the back of this panel, there was an inscription “PINXIT MEA” (painted by me).

I was asked to check, from a graphological point of view, whether the inscription “PINXIT MEA” had been written or not by the hand of Leonardo da Vinci.

After careful examination and a confrontation with the anastatic copies of the “Atlantic Codes”, jealously kept in my studio, I considered that it was probably attributable to the hand of Leonardo da Vinci. 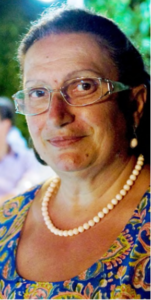